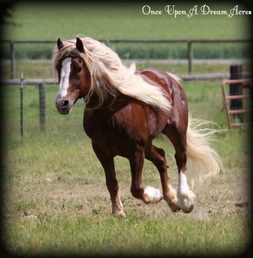 The Black Forest Horse is a small, sturdy draft that was bred for working on the farmlands and in the forest. They are a hardy breed that can handle the long winters of the highlands. They are now being used mostly as riding and coach horses as the need for farm animals has declined. They are a beautiful durable animal, that is very cleaver, and known for it's strength, durability and soundness. Coupled with a very gentle, sweet nature, they are the perfect all around horse.  They are a very easy keeper and are known for being long-lived with high fertility. They have strong legs and big hooves to stand up the strains of work needed for working in the farmlands and forests of the German Black Forest. The most common color is Chestnut, from the deep dark liver chestnuts up to a very bright red sorrel. Most of them come with the light flaxen mane and tails; the dark chestnuts being one of the favorite colors. The breed used to come in other colors, but many were lost when the breed declined in number. There is currently a family of Bays and a family of Greys, though it doesn’t look like the greys will continue, it wasn’t as successful in the attempts to be brought back as the bays were. The Black Forest horse is generally in the 15 hand range which is not a size generally found in the draft world. It makes them a great size for riding as well as still being able to pull a beautiful cart of carriage. They are typically between 14.2-16 hands and 1250-1400lbs in size.

The Black Forest Horse saw a great decline in their numbers and by the 1980’s there were only 160 registered broodmares and a handful of a stallions. They had been replaced by machinery and weren’t need as farm work horses any more. The breeders and owners decided to find other uses for them so that the breed wouldn’t be lost. They were started to be used as carriage horses for weddings, brewery vehicles, and also as a fantastic riding horse. Such a sturdy horse could carry any rider through all different terrains with easy, beauty and comfort. They are a fantastic horse for children as well! We are thrilled to announce they are on the uprise again and the breed is gaining popularity again! There are now over 700 registered mares and 46 State Approved Stallions (16 standing at the State owned Stud Farm in Marbach/Baden-Wurttemberg Germany.) We are looking forward to seeing this breed continue to grow and we look forward to helping build them in the United States.

There is are 6 main bloodlines in the Black Forest Horse. The two oldest lines are the D-Line and the M-Line. The next two are the R-Line and the W-lines. The most recent line was the F-line that was created with the addition of Freiberger blood and the V-Line was had the addition of Schleswiger blood. The F and V lines were necessary add so that close inbreeding could be avoided when the numbers because so low and the breed endangered. The D, M, and R lines tend to be a little smaller and more compact (14.2-15.2 hands.) The W, F, and V lines are more known for being later in size and more of a “large” draft stature (around 15-16 hands.)

Black Forest Inspection and Registration
Black Forest Horse have to go through a strenuous selection process by the state selection committee at 3 years old. They have to pass multiple inspections. The forst inspection is based on conformation, movement, and overall appearance. The second inspection is the Performance Test which are driving and pulling performance tests. Also included in the judging of any of the performance test is overall disposition. (Temperament, Character, Willingness to perform) as well as the other abilities such as pulling ability, basic gaits (at the walk and trot), and performance potential.

If a young stallion can pass all these tests, they earn the title of “State Approved Stallion”. They are now allowed, by the state, to breed to state approved and registered mares. They observations are not over after a stallion has come a State Approved Stallion. They are continually watched over the years following. If they continually produce outstanding offspring, then they can receive the title of “Premium Stallion” and possibly even the “Elite Stallion” title. “Elite” is the highest status and honor a Black Forest Stallion can receive. If the stallion or prospect is not approved by the State, they are not allowed to breed a mare. He will be gelded and make a fine riding or driving gelding. The mares also can receive a “State Premium” title. It is the highest honor in the breed a mare can receive. They have to successfully pass the pulling and driving performance test that the stallion prospects have to pass. They also have to pass a tests of conformation and overall appearance, that they will be either in foal or have a foal by foot.  A Foal (colt) will be inspected between 4-6 months of age for overall appearance, conformation. The foals can earn  a “bronze”, “silver” or “gold” medals depending on their inspection.
Black Forest Horses in the United States
The Black Forest Stables in Washington became the first breeders of the Black Forest Horse in the United States in 2001. They imported 3 pregnant mares, Ramona, Waleska, and Wendy that would serve as their foundation mares. Ramona was bred to Montan before leaving Germany, and Montanara was born in March 2002, making him the first Black Forest Horse born in North America. They built a beautiful breeding program in Washington and welcomed many beautiful foals! They also worked with the German Registry to establish a Black Forest Horse Registry in the United States. We are thrilled that Urusla Seidel has allowed her beautiful stallion to come stand at Once Upon a Dream Acres. We can’t wait to work closely with her and Black Forest Stables to breed, promote and build this beautiful breed in the United States! We feel very lucky to have such a wonderful, experienced mentor to help us along!
Black Forest Horses at Once Upon A Dream Acres


It was "love at first sight." I saw a few pictures of this amazing breed and some of the horses that Ursula had raised, and I knew this was the breed for me! It's taken years of searching, but I am SO thrilled that I finally have some of these amazing horses join our family! We have been so incredibly impressed by this breed! Please visit their pages to see the beautiful horses that we have the privilege of having in our program!